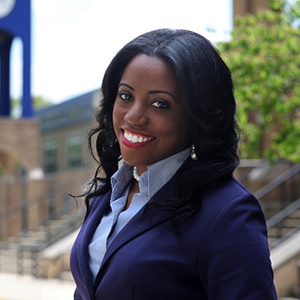 Dr. Jones is the Assistant Dean of Community Engagement, and Chair of the Public Safety Programs at Franklin University.  She also oversees the Center for Public Safety and Cybersecurity Education (CPSCE), and the Global Center for Healthcare Education (GCHE) at Franklin University.  Dr. Jones received her Ph.D. in the Administration of Justice from Texas Southern University in Houston, Texas.  Her research interests include race and crime, policing, and juvenile delinquency.  She is particularly interested in issues of police/community relations, disproportionate minority contact (DMC), mass incarceration, and the intersection of race and gender in the criminal justice system.

Dr. Jones currently serves as the National Director of Research for the Teen and Police Service (TAPS) Academy, a federally funded program designed to reduce social distance between police officers and youth.  As the Director, she is responsible for establishing the research agenda, analyzing data, and serving as a consultant for best practices in improving relations between teens and the police. She has written numerous articles and book chapters on public perceptions of the police, race, and the administration of justice.  She is also the co-editor of A Critical Analysis of Race and the Administration of Justice.

Dr. Jones is a highly sought-after speaker, and has conducted several presentations, keynotes, and media appearances on issues of race, police/community relations, and disproportionate minority contact.  She is a reviewer for the U.S. Department of Justice Office of Justice Programs, the National Institute of Justice (NIJ), and several academic journals including the Journal of Juvenile Justice, the Journal of Offender Rehabilitation, and Race and Justice.  She is a crime analyst for TV One’s hit show “For My Man.”  She was appointed by Columbus Mayor Andrew Ginther to serve on the Columbus Community Safety Advisory Commission. She is a member of the Juvenile Detention Facility Assessment Team for Franklin County.  She is an ambassador for the Ohio Office of Criminal Justice Services’ Change Starts Here campaign.  She is featured in “An Unfinished Documentary…Change Starts with You” which highlights law enforcement and community-wide efforts to improve police/community relations.  Dr. Jones founded Come Together Columbus, which is a loose collective of organizations and individuals committed to racial justice, community empowerment, and police reform in Columbus, Ohio.

Dr. Jones is the recipient of numerous awards including Franklin University’s Dean’s Award Recognizing Excellence, the Central Ohio Social Justice Award for Education Advocacy in Higher Education, Columbus Business First’s 40 Under 40 Award, the Conley Award for Excellence in Teaching, the Sankofa Award for Education, and the Visionary Award by Columbus City Council and the Create Columbus Commission.  Dr. Jones is the 2018 recipient of the Emerald Literati Award for Most Outstanding Author Contribution for her book chapter The New Jane Crow: Mass Incarceration and the Denied Maternity of Black Women.  She serves on the Board of the Grant Foundation for Grant Medical Center, the Columbus Impact and Inclusion Advisory Board for Columbus Young Professionals, and the Advisory Board for the Black Legacy Advancement Coalition (BLAC), which is a national policy think tank organization established to advance and defend African American interests for life and legacy.  Dr. Jones is also a member of several community and professional organizations including Alpha Kappa Alpha Sorority, Incorporated, the Create Columbus Commission, the Academy of Criminal Justice Sciences, the American Society of Criminology, the National Association of Blacks in Criminal Justice, and the Racial Democracy and Criminal Justice Network.